I will always regret never visiting the original Five Guys location. I moved to Arlington, Virginia in 1997, and had a couple years in which I possibly could have done so, but I had never heard of the place (it was pre-blog times, and nobody could have shared with me Important Burger News electronically, like they can and do now) and now the location is closed and gone, part of burger legend.

The first Five Guys opened in 1986, in the Westmark strip mall (3235 Columbia Pike, Arlington, Va) at Columbia Pike and Glebe Road in Arlington, Va. Over the next 13 years, 4 more locations opened. In 1998, the original location closed. In 2002, Five Guys started franchising, and now there are over 500 stores - but no mothership, no high temple, no ground zero for 5G fans. (I guess the second store, at 4626 King Street, Alexandria, VA, should assume that role now.)

I went by the original location last week, just to see what I could see. It is now home to a "Dave's Seafood & Subs" The owner said he had assumed the location from his cousin, who ran a store there for just a few months in 1998 after the 5G closed. His place has been open 11 years - almost as long as the original 5G, so good for him. (I don't think he will be franchising, however. But try the sweet tea.) I asked if anything in his store was left over from 5G, or if he had any interesting information about assuming the same space first used by a national chain, but he had nothing to share. Bummer.

Some photos of the location as it is now- 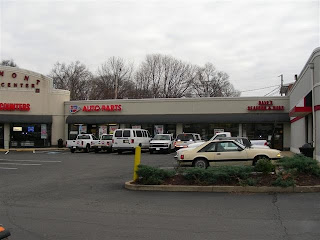 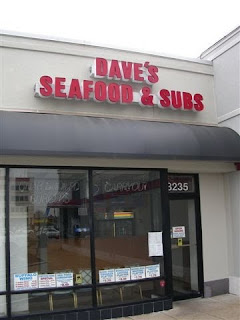 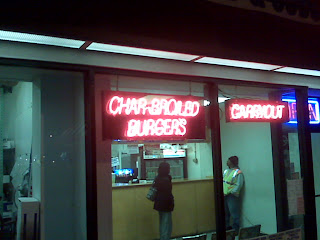 I can not find any pictures to link to of the place as it was. If you know of any, please share.

What is now a car parts store next door used to be an H&R Block, and before that it was a Brenner's Bakery. That bakery used to provided ALL the buns for 5G. The Arlington Brenner's closed on December 31st, 2001. It was owned by family members of the other Northern Virginia Brenner's Bakery, which is in Alexandria. Although the Alexandria store is no longer owned by the Brenner family, and no longer provides all the buns, the person I spoke with there said they do provide for some of the local locations, and also sell the buns in the store. So I am going to go get some of those for home use. (Post to follow, of course)

Since I am forever denied talking about what it was like to go to the first 5G, I solicited reminiscences from a friend, who lived down the street from it and did go. Here is his account:

"I moved to Washington in May of ’97 and lived in an apartment on Columbia Pike right off of 395. As a restaurant junkie I would go around and try to find restaurants I might like. I wasn’t aware of what 5 Guys was or hadn’t gotten to the word of mouth moment. The original was located off of Glebe Road and Columbia Pike tucked out of sight on the Columbia Pike side in a not very nice strip mall. There was a mattress store, a video store a little hole in the wall restaurant named Mom’s that is still there and the bakery next door.

The inside was fine, but felt like a short order place. They had the peanuts and the white and red paint scheme. I want to say they also had the peg board with index cards. It had the smell of peanut oil and grease. There were no places to sit and it was pretty confined, but there was always a line. However, with the peanuts, it just felt like waiting was part of the experience.

Like ninety-something percent of their customers, it took one bite and I was hooked.

A friend of mine who also had moved out here was trying to get into Officer Candidate School and needed letters of recommendation from military officials. My friend was in Durango, Colorado talking to a retired General and told him about living on Columbia Pike. The General told him a story about the best hamburgers he had ever had off of Columbia Pike. My friend was accepted and at the point I knew this place had a real following. If only I had thought enough to try and get in on a franchise early." (Thanks, Jon.)

So, a little trip down Memory Lane, sadly reflecting on what I missed.
Posted by The 6th Guy at 11:40 AM

The 6th Guy
Fan of Five Guys Burgers and Fries...hoping to visit all locations.